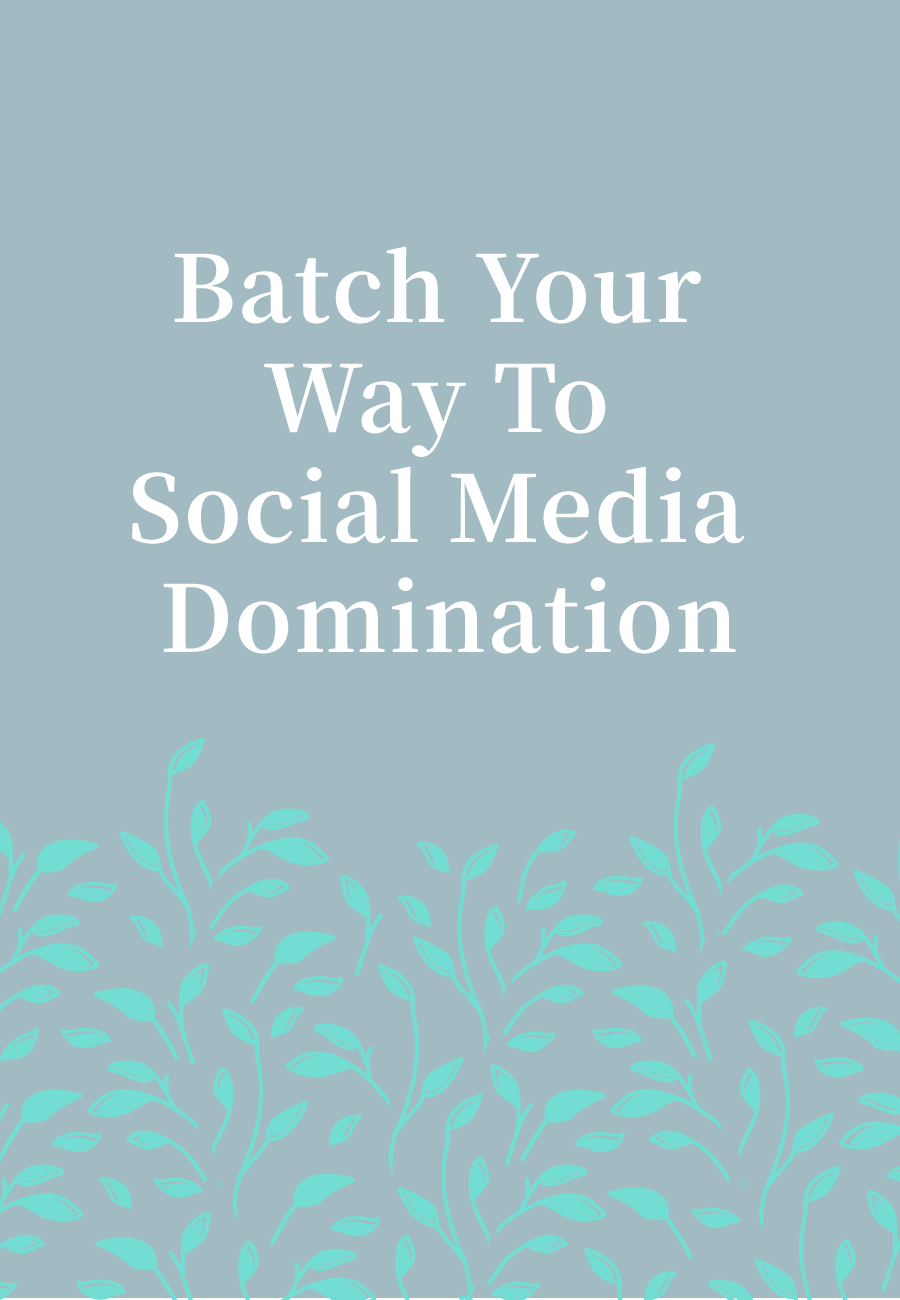 Keep your social media posting on schedule by batching

It’s dedicating a block of time to a dedicated task. There is a ton of different ways to go about it, you might dedicate one whole day to batching, a certain day each week, or even a few hours a day. There is no prescribed amount of time you have to batch for.
Below is the process I use to batch my content for various social media channels. If you want to read about how I organize and gather that content, you can read about that process here. I’m not going to lie, I straight up do most of this except for Instagram on the couch while watching tv. 😁  I do have a different process for scheduling and writing my own content’s social media as part of my blog post writing. When I’m scheduling my own content with this process I’m grabbing pre-written posts I store in Trello.

Batching Frequency: My per day pin frequency (queued schedule) is about 30-40 pins per day (I was pinning 50 for a while but saw zero change in repins or new followers). I *typically* batch from Pinterest in the evening for 1 to 2 hours 3 days a week.

A good amount of my curated content comes from Pinterest. So when I’m pinning to fill my Tailwind queue I also typically schedule in Tweets & Facebook posts of SOME of those pins. Other sources for content include Feedly & Facebook Group Promo Days.

Tailwind has a very handy feature called Your Board Lists. I grouped my Pinterest group boards into 3 group boards per board list and then named them colors.

Why colors? Because I previously had a different process of pinning to sets of groups boards, and I had those divided into colors as well. It was the just part of a process I already had.

I schedule each board list with 3 other pins & one of my own pins and then use the interval setting (see pic below) to spread those boards and pins throughout the week. So below the red board list will be first board on Wednesday, second board on Friday, and third board on Sunday. 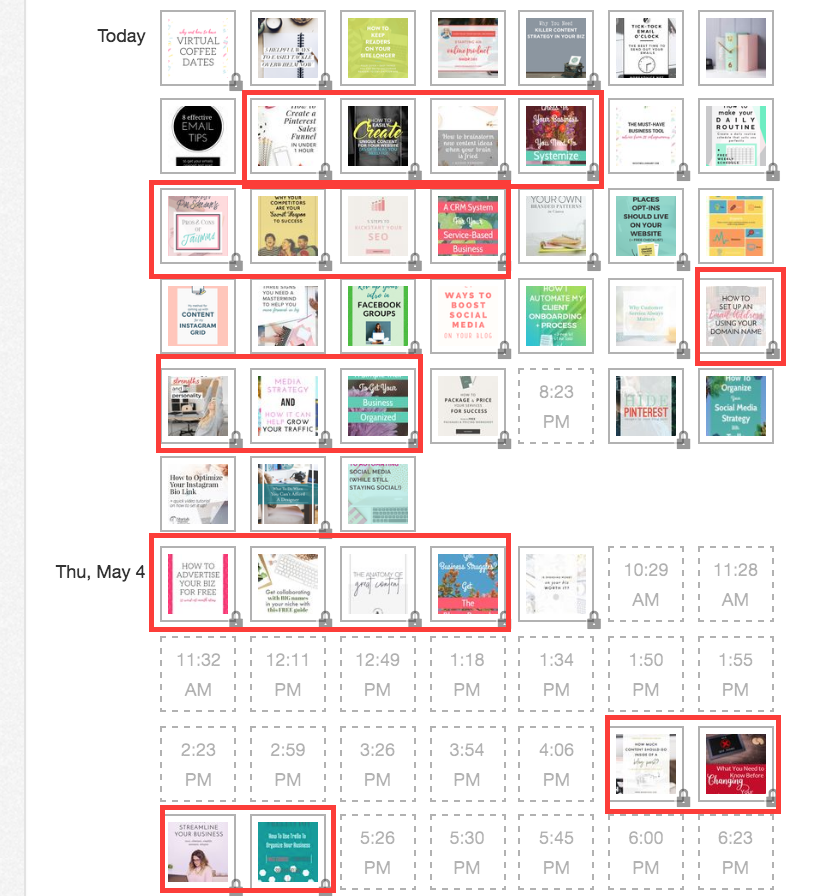 I schedule a group board list and then go through those group boards to schedule in pins to my regular boards. It really depends on how active the boards are if I’m finding a lot of new pins to share to my other boards. I periodically check my Tailwind queue to see if I have scheduled enough pins to have space between group boards, and I will then schedule another group board list.

I do take the time to click on the articles I pin and scan them. Most of the time I will also schedule the same articles onto Twitter and more sparingly into Facebook. I utilize Buffer to do this. One article three social media channels! I don’t really pay attention to the time/date slot I’m scheduling into for Twitter & Facebook as I move the scheduled posts around in a separate batching session.

Batching Frequency: Once or twice a month, for about 1 to 2 hours.

Not all my content for Pinterest, Twitter & Facebook comes from Pinterest. Throughout the week, I will randomly add in posts from other sources like Feedly, Email Newsletter or other Facebook posts but those just get popped in quickly to Tailwind & Buffer and then rearranged as needed. For newly created content I publish throughout the month I will leave in spaces for that to be scheduled once it’s published.

I open Buffer and will typically fill out my schedule for the full month as I only tweet about 6-8 tweets per day. I make sure to fill in 3/4 of my own posts to Twitter per day, and then fill in the rest of the optimized time slots with those tweets I’ve randomly scheduled in the prior step. Facebook is the same process though my scheduling frequency is not as high, but I move around those randomly scheduled posts to fit around my own content.

Batching Frequency: Once to twice a week about 1 hour each session. I post to Instagram once per day M-F.

I typically plan out general themes/topic in one sitting for the month using the content planning worksheet included in the social media planning guide.

I have been adding more themed days to my schedule so for example I know on Tuesday I’m sharing a business tip and Wednesday I share my blog posts.

For most posts I’ll just choose from my hoard of pictures. I collect pictures all the time on walks, dinner/coffee/outings or I’ll feel in the mood when I get a new notebook or other office type item to do some random pictures. Every once in awhile I will take more intentional pictures to fit a theme like I did with B-School.

Instagram takes me the longer to think of captions, pick the picture, edit the pictures and add in the hashtags so I typically schedule 2-3 in a batching session a few days a week to keep myself caught up.

That’s the honest look at my social media batching routine. It’s not perfect and I know it could be more efficient. Watching tv doesn’t really boost the efficiency but I that’s when I like to do, it is very hard for me to just sit and watch a show (few shows will I pay full attention to) and I truly feel this is a good use of my tv time. I like feeling I’m being productive and kicking back a bit at the same time. Some people knit or color, I do Pinterest. BTW prior to my business I use to do Pinterest and TV too, I was just typically pinning recipes to try and craft projects I would never do. 😉

Find more tips on how to boost your productivity here.

Tailwind, Later and Trello are referral links where I get a free service if used. No additional fee to you.